This is the Puppy Aptitude Test used by the Monks of New Skete.  The Monks raise and sell German Sheppard puppies.  Taken from the book “The Monks of New Skete, The Art of Raising A Puppy”
The test is the Volhard Puppy Aptitude Test.  The Monks have used the test to help match their puppies to new owners.  The test could be considered a puppy personality test.  The test is given on the 49 day.
It is important to remember that the puppies have been slightly stressed from birth.  Even though some believe that that handling of puppies for the first 3 weeks have no effect on the puppies, the Monks disagree.  They stress the puppies by handing them daily, massaging the stomach, as well as reducing the body temperature of the puppies by placing them in box in a cooler room.
The military has a super dog program where they stress the puppy, believing this makes for a better military dog.
The puppies are well socialized before the testing.  Each Monk is scheduled time to play with the puppies.

There are nine tests, that are scored from 1 to 6.

Test # 3.  RESTRAINT:  The tester is to crouch down and gently roll the pup on his back, and hold it with one hand for a full 30 seconds.  This tests the degree of dominant or submissive tendency.  How it accepts stress when socially or physically dominated.  Scores: 1 Struggled fiercely, flailed, bit.  2 Struggled fiercely, flailed.  3 Settled, struggled, settled with some eye contact.  4 Struggled then settled.  5 No struggle. 6 No struggle, straining to avoid eye contact.

Test # 4.  SOCIAL DOMINANCE:  Let pup stand up and gently stroke him from the head to back while you crouch beside him.  Continue stroking until a recognizable behavior is established. This tests the degree of acceptance of social dominance pup may try to dominate bu jumping and nipping or is independent and walks away.  Score: 1 Jumped, pawed, bit, growled.  2 Jumped, pawed.  3 Cuddles up to tester and tries to lick face.  4 Squirmed, licked at hands.  5 Rolled over, licked at hands.  6 Went away and stayed away.

Test # 6  RETRIEVING:  Get the puppies attention, and toss a crumpled up piece of paper 4 to 6 feet.  Test the degree of willingness to work with a human.  High correlation between ability to retrieve and successful guide dogs, obedience dogs and field trial dogs.  Scores:  1 Chases picks up paper and runs away.  2  Chases paper stands over it, but does not return.  3 retrieve paper back to tester.  4 Chases, and returns without object.  5 Starts to chase and loses interest.  6 Does not chase object.

Test # 9  SIGHT SENSITIVITY:  Tie a rag on a string and pull it around in a jerking manner in in front of the pup.  This test the degree of intelligent response to a strange object.  ( I think it just tests pray drive in a German Shorthair.  All scored a 1, after attacking and biting the rag.)  Score:  1 Looks, attacks, and bites.  2 Looks, barks and tail is up.  3  Looks curiously, attempts to investigate. 4  Looks, barks, tail is tucked.  5  Runs away.  No score of 6.

Mostly 1’s  A puppy that consistently scores a 1 in the temperament section of the test is an extremely dominant, and aggressive puppy who can easily be provoked to bite.  His dominant nature will attempt to resist human leadership, thus requiring only the most experienced of handlers.  This puppy is a poor choice for most individuals and will do best in a working situation as a guard or police dog.

Mostly 2’s This pup is dominant and self assured. He can be provoked to bite; however he readily accepts human leadership that is firm, consistent and knowledgeable. This is not a dog for a tentative, indecisive individual.  In the right hands, he has the potential to become a fine working or show dog and could it into and adult household, provided the owners know what they are doing.

Mostly 3’s  This pup is outgoing and friendly and will adjust well in situations in which he receives regular training and exercise.  He has a flexible temperament that adapts well to deferent types of environment, provided he is handled correctly.  May be too much dog for a family with small children or and elderly couple who are sedentary.

Mostly 4’s  A pup that is an easily controlled, adaptable puppy whose submissive nature will make him continually look to his master for leadership.  This pup is easy to train, reliable with kids, and though he lacks self confidence, makes a high quality family pet.  He is usually less outgoing than a pup scoring 3’s,but his demeanor is gentle and affectionate.

Mostly 5’s  This is a pup who is extremely submissive and lacking in self confidence.  He bonds very closely with his owner and requires a regular companionship and encouragement to bring him out of himself.  If handled incorrectly, this pup will grow up very shy and fearful.  For this reason, he will do best in a predicable, structured lifestyle with owners who are patient and not overly demanding, such as an elderly couple.

Mostly 6’s  A puppy that scores 6 consistently is independent and uninterested in people.  He will mature into a dog who is not demonstrably affectionate and who has a low need for human companionship. In general, it is rare to see properly socialized pups test this way; however there are several breads that have been bred for specific tasks such as basenjis, hounds, and some northern breeds which can exhibit this lever of independence.  To performs intended, these dogs require a singularity of prostate is not compromised by strong attachments to their owner.

For most owners, a good companion dog will score in the 3 to 4 range.

We also look for a puppy who has a strong desire to point at 7 weeks and give this test also at seven weeks with the Volhard Test.  We combine the retrieving test as well.  These two tests along with some bird work, the Volhard Test, and the 7 weeks we have spent with the puppies gives us a pretty good incite into each puppy.  All to this the hundreds of puppies we've test and the fact that we also tested, raised, and hunted each of the parents.

We do the pointing test before the retrieving test, because we want to see if the puppy will point the paper when tossed before they retrieve it.  We have a broom handle with a sock tied to about 6 feet of cord. There is an art to flipping the sock (I'll post a test video so you can see it).  If the puppy points the sock, points the paper when tossed, and retrieves the paper, and scores high in the Volhard test, be assured the puppy will be a fine hunting and family dogs. The one thing we can't test for is love of water. We rely on genetics for this.  We also use a quail, or pigeon with the wings clipped to see it puppy will chase and carry the bird around.

What do I recommend you do when picking out a puppy?

Dress for success, no open toed shoes, long pants are better that shorts, and ladies, no low cut shirts, hair tied back will help.

The first thing is trusting the breeder, if you trust them, tell them everything you will do with the dog, and what you expect of the dog.  The more knowledgeable the breeder the more faith you will have in them to pick out the right pup for you, that will grow into the right dog for you.

But here's what you can do: Look for a bold, confident, loving puppy, and one that looks good to you. But remember looks are only skin deep, don't pass up the right pup that will be the right dog in your life for over 10 years because of looks.  Next, take this puppy away from the rest, and have a wing or something tied to a pole, and a wadded up piece of paper.  Put puppy down and walk away four big steps, and don't call puppy yet, did puppy follow you? If so great, if not ok, bend down and call puppy to you.  Puppy should come.  Pet puppy and see if it wants to be played with.  Roll puppy on it's back and see if it's calm.  If it's not, I would probably find one that is.  Wad the paper up and toss it about six feet, puppy must be watching. This is not easy. Puppy should retrieve the paper to you.  Do this as many times as puppy will bring in back. 15 times is about the record. If puppy points the paper when tossed, puppy has a strong point.  Then see if you can get the puppy to point what ever you have tied to the pole.  Last see if puppy will lick you. Some shorthairs don't lick, ever. I think it's the English Pointer in them, anyway I like a dog that licks.

Boy or Girl? I've heard it all.

Some swear by boys, others by girls.  Boys pee on stuff, girls come into heat.  Girls are smaller, boys are not that big. Shorthairs get around mush better than Labs, so a big shorthair 70 pounds can still get in your lap. Some German dogs, 80 to 90 pounds are to big.  If you are even thinking of breeding you need a girl. Boys I think are more your  pals if your a guy, not sure about you ladies, just seems that way to me. They both hunt about the same. Our Lady might  be the best, but I'm spiting hairs, Jack might be the all around best dog I've ever owned, but again I'm splitting hairs.

What I love about Shorthiars are so many color combinations. That said, if I was only breeding to sale pups they all would be like the one you see in pictures. Liver, white, patched, ticked and roaned.  Because that is what 90 percent of people call for. But in a performance based breeding program you breed the best to the best.  My thoughts on color.

White, with liver head, little or no roaning, or even ticking. Field Trial lines, 28 percent of American breed shorthairs. Big run, lack of natural retrieve, not good in the water, great cardiovascular system, great point, and back and can find birds. I very rarely get a call for this type of dog. In my option make the worst of family pets. Exceptions, a German DK shorthiar in white, is genetically a different dog. American Versatile Hunting Dog lines, like our Rob.  These are few, and the breeder better be able to convince you why their white dogs love the water, retrieve naturally, and hunt close.

Solid Liver, never seen one I did not like. All seem to be versatile hunting dogs, and good family dogs.

Solid Black, probably heavy in German lines, will be great in the water, make sure they point before buying as in all German lines.

Liver, white, patched, ticked, and roaned, should be fine, it's what ever one wants.  Versatile hunters, and good family dogs. Most are good in every area.

Black, white, patched ticked and roaned, this tends to be very versatile in hunting and with the family. Most love the water, natural retrieve, point and back, close working, great temperament, even without the roaning, as in a black and white.

Roaning, what is it.  When two colors blind together to give an appearance of a third color. Black and white, as well as liver and white blinded to give the look of grey. like in Dolly's girl below. 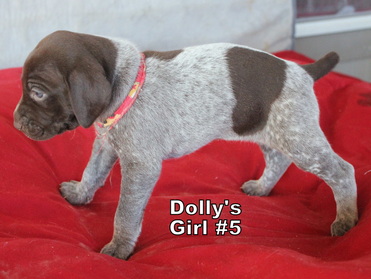